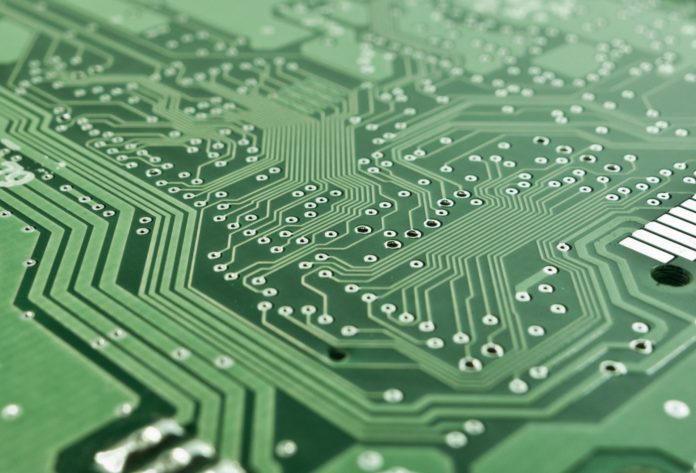 According to HackerRank, the six best programming languages for FinTech and finance are Python, Java, C++, C#, C, and Ruby. 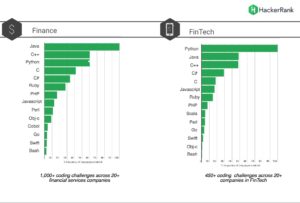 But don’t think that Python is the best solution just because it’s number one on the list. Each project requires a detailed consideration of all the technical and business requirements and your specific needs. What’s most important is to take into account the benefits and drawbacks of each language and check out successful use cases.

Python is a general-purpose technology created by a developer from the Netherlands.  Guido van Rossum, the creator of Python, wanted his language to be very simple. The main peculiarity of Python is that its syntax is minimalistic.

Python became a solution in many different areas so this language is very popular and widely used and therefore Python developers are in high demand.

Python is a leading programming language in the FinTech sphere and is also widespread in the banking, insurance, and data analysis industries. Python is also becoming popular as a tool to build cryptocurrency markets. What’s more, some claim that Python is the best technology for machine learning.

The main advantages of Python that make it so popular in the FinTech industry are:

Despite all these benefits, there’s a fly in the ointment. Here are the drawbacks of Python.

Vyze is a US FinTech startup that provides financing services and connects retailers and lenders. These lenders provide numerous retail consumer financing products via the Vyze platform that works across point of sale devices, tablets, self-service kiosks, e-commerce solutions, and web portals.

Bought by Many is a service for people with uncommon insurance requirements who can’t get standard insurance to meet their unique needs (for instance, to insure a crocodile). People gather into different interest groups on the platform to get better offers from insurance companies.

Java is a programming language that promotes OOP principles and was designed by the Canadian James Arthur Gosling who worked for Sun Microsystems. The language was officially launched in 1995 and soon after was sold to Oracle.

Java is a favorite programming technology for banks as it offers security and is great for building heavily loaded programs that can deal with a huge amount of data.

Java is language number one for big data projects and is quite popular in the financial and FinTech industries. Here’s why:

Nevertheless, there are several disadvantages of Java that you need to know about:

Goldman Sachs is a US multinational investment bank that trades securities and offers investment and asset management services. The bank has used Java as the core technology for their e-trading system.

Barclays is a British financial conglomerate that offers all possible banking services from personal banking and mobile banking to investments. Barclays mainly uses Java and C++ in their projects.

C++ is a general-purpose technology that was designed in the 1980s. Bjarne Stroustrup, the creator, took the C language and made adjustments needed for his project. Stroustrup was working with the Simula programming language at the time and created C++ by copying Simula capabilities that he needed into the C language.

In the FinTech industry, C++ is used for programs where execution speed plays the most important role, as C++ is well known for its efficiency. This technology is commonly applied to programs that require advanced computations and have to process numerous operations quickly. Additionally, C++ is considered one of the best technologies for quantitative finance and quantitative analytics.

There are also some language limitations you need to bear in mind when considering C++ for your FinTech project.

Bloomberg is an open source platform aimed at providing financial news and data 24/7. This data concerns real-time price information, financial information, trading news, and analytics. The project is created with the help of C++ and C technologies.

QuantLib is a free and open source framework written in C++ for quantitative finance. It provides developers with modeling, trading, and real-life risk management capabilities.

Microsoft designed C# for its internal needs in 2001. The language has C-like syntax. Anders Hejlsberg, the main creator, took all the best from C and Java and combined it in his new language.

Developers choose this language because of:

The technology also has some limitations:

Cadre is a NYC-based startup launched in 2015. The company provides customers with insights into real estate investment opportunities and real-time analytics so they can make well-considered, hassle-free decisions on where to invest.

Easyship is a company that aims at helping small and midsized e-commerce businesses sell all over the world and ship their goods worldwide with one click. Easyship allows businesses to compare prices and taxes for more than 40 shipping companies.

C was created in the 1970s by Dennis Ritchie for the UNIX operating system. C has influenced a lot of modern programming languages such as C++, C#, Objective-C, and even Java.

The technology has a long list of benefits for developers. Here are the most significant:

Some limits that C places on developers include:

Although Ruby isn’t a leader in the list of the best programming languages for the FinTech sphere, Ruby has all the capabilities and characteristics that are necessary for fast and successful app development and is also worth considering as the main technology for your project.

Ruby was created as a puzzle in 1995. Yukihiro Matsumoto (also known as Matz) combined the most efficient features of Lisp, Perl, Ada, Eifel, and some other technologies. Ruby is a dynamic and reflective technology that’s sophisticated and capable at the same time.

It’s worth mentioning that Ruby is one of the favorite choices for startups. Developers like using Ruby for their financial projects because of a range of advantages:

As for Ruby’s disadvantages, there are some bottlenecks which you need to take into account:

Coinbase is a digital currency e-wallet. The wallet lets customers link their bank accounts to the system, manage assets, and buy and sell cryptocurrencies.

Sush.io is a dashboard where users can track their bank operations, expenditures, and revenue. Users can sync their Stripe, PayPal, and Etsy account data with QuickBooks online.

BillFront is a RubyGarage project for the FinTech industry. This financial solution was launched for publishers, ad tech vendors, and ad networks. The platform allows users to access their revenues faster and not depend on long payment terms.

The right technology is the foundation of any project. Your technology stack has to fit all the project criteria and meet your demands. Each language is perfect for a specific purpose, so make sure you have a clear understanding and vision of what your project is going to be like.

PS: The article was made by RubyGarage team