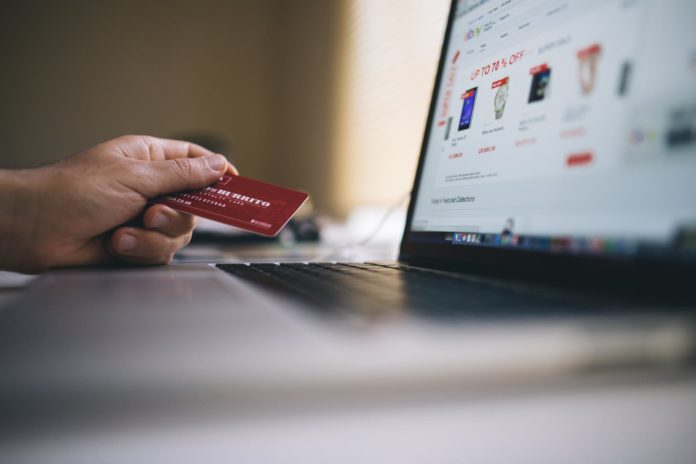 CONSUMERS across Asia have embraced digital technologies, making steady and growing use of the internet, social media, and e-commerce platforms.

Smartphones — the device of choice — alone generate around 65% of all internet traffic. This new digital reality holds true for banking, with most consumers embracing digital banking either on their computers or smartphones/mobiles.

The insights in this report are based on McKinsey’s proprietary Personal Financial Services (PFS) survey, which has been conducted every three years since 1998. The survey now covers about 17,000 urban banked respondents in 15 Asian markets.

The survey reveals that digital banking penetration has grown 1.5 times to three times in emerging Asia since the last survey in 2014. The median for developed Asia is around 97%, and 52% for emerging Asia.

Smartphone banking penetration has grown at a faster pace than overall digital banking, jumping two- to four-fold in many emerging Asian markets.

With 30 to 50% of those not using digital banking expressing the likelihood that they will eventually make the switch, growth in digital banking penetration is expected to accelerate in emerging Asia.

The percentage of digitally active customers (those who use digital banking at least every fortnight and have made e-commerce purchases in the last six months) has grown significantly since 2014, doubling in emerging Asia (to 25% of the population) and growing 1.2 times in developed Asia (to 85% of the population).

This growth of digital banking has led to disruptive trends such as the declining relevance of physical bank branches and the increasing threat of new-age “pure” digital players gaining share.

Three questions loom large for banks and non-bank disruptors in this dynamic landscape. Physical branches have been the traditional customer engagement channel, but there is a clear shift in Asia towards digital channels for daily transactions. Bank branches now account for only 12 to 21% of monthly transactions. Customers prefer digital platforms for simple, routine transactions such as checking their balance, peer-to-peer transfers, or bill payments.

Overall customer engagement has grown from an average of 12.7 to 14.9 monthly transactions in developed Asia, and from six to 8.1 in emerging Asia, with increased smartphone usage driving growth in each case.

However, a significant percentage of customers in Asia still use the physical branch for transactions they consider complex. For Asia’s banks, this means that as they evaluate their branch networks they need to think about more than simply footprint. They also need to shift branches from purely transactional points to interaction hubs that meet customer needs for financial advice and sales of more complex products (e.g., investments).

2. How disruptive are the new-age digital players? 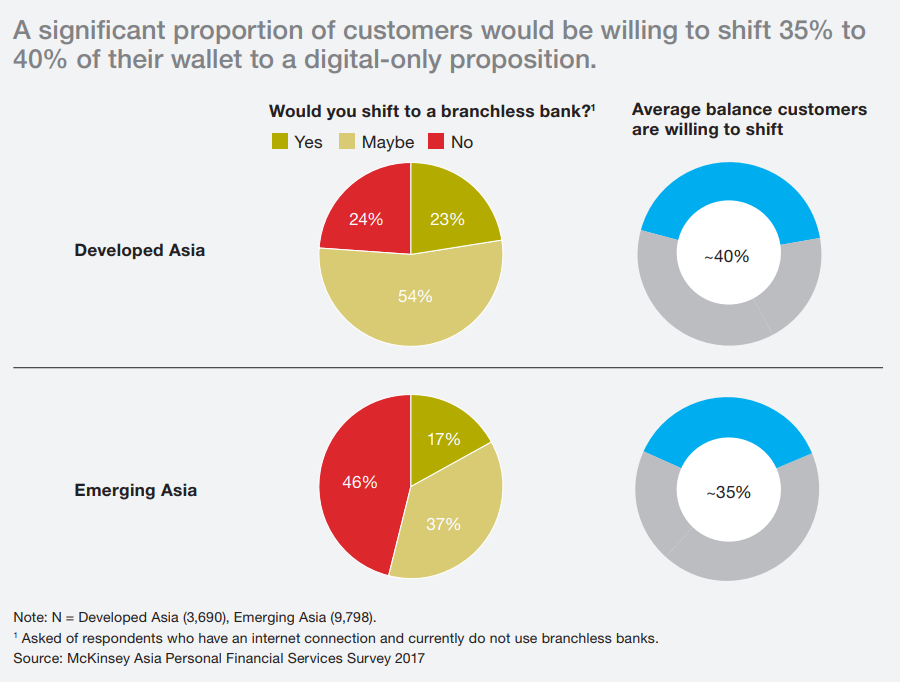 With many consumers willing to go “fully digital” with regard to banking, a set of digital propositions is emerging to cater to these digitally-savvy customers without the limitations of a physical distribution network.

In 2016, BTPN in Indonesia launched Jenius — a standalone and first-to-market digital bank, while Singapore’s DBS launched its mobile-only digital bank — digibank — in India in 2016 and expanded to Indonesia in 2017.

McKinsey’s PFS survey results highlight a significant opportunity for these entities — approximately 55 to 80% of customers in Asia would consider opening an account with a branchless digital-only bank; and those willing to bank digitally would be willing to shift between 35 to 40% of their total wallets to the digital account.

These leading positions are due in large part to the widespread success of payments solutions from firms such as Alibaba, Tencent, and PayTM. Combined, Alibaba’s Alipay and Tencent’s WeChat Pay have an approximately 94% share of China’s US$6 trillion mobile payments market.

Both boast an active customer base of over 500 million and have made their mark in the Chinese payments market through strong integration with their existing sister entities — Taobao and Tmall (Alibaba) and WeChat (WeChat Pay).

India’s PayTM launched in 2010 as a mobile recharge player but now operates a variety of payments-related solutions, including a mobile wallet, a payments gateway, an online mall for bookings and bill payments, and a financial marketplace for investment and loan products. PayTM has more than 200 million customers and five million merchants. The company plans to venture into wealth management and insurance distribution soon.

3. Can banks still bank on loyalty?

The PFS Survey measures loyalty and customer satisfaction by asking how likely customers are to recommend their bank. The research shows that loyalty towards primary banks in Asia is comparable to 2014 levels, and varies significantly between developed and emerging Asia. In Asia, customers rely quite heavily on the internet to evaluate banking products such as credit cards and auto loans, and to compare products, benefits, and prices before purchase. Customers also trust these digital resources — about 35 to 50% of consumers in Asia changed their mind after considering or evaluating a product online.

But these increased numbers still lag those in other sectors. Digital sales penetration is around 65% in developed Asia and between 10 and 15% in emerging Asia; by comparison, e-commerce penetration in the two regions is around 95% and 45% respectively.

For banks, a focused digital marketing effort will involve building up their online brand and presence and investing in customer acquisition campaigns and engagement through social media, internet advertising, and other media. Done well, digital marketing can help banks acquire customers at a lower cost than traditional marketing. Second, since most simple digital transactions are conducted through self-serve channels, digitally active customers have a lower cost-to-serve than non-digital customers.

In terms of their digital preferences, McKinsey categorises banking customers into three segments: 

The 2017 PFS survey found that the percentage of digitally active consumers has doubled in emerging Asia since 2014, and grown by 20% in developed Asia over the same period.

In Asia, DBS was the first bank to develop a methodology to measure digital value creation, reflecting the changing attitude of banks towards the topic. It defined “digital customers” as those who either purchased a product digitally over the last year, or conducted over 50% of their financial or non-financial transactions over digital channels. Tracking digital value creation helped DBS enhance value from digital channels.

Digital customers, who form 39% of the customer base, contribute to around 68% of profit for the bank, before allowances. A wealth of customer information (from internal and third-party sources) could help banks strengthen customer relationships. Banks could gain insights on customers’ personal financial management (where they spend their money), offer tailored solutions (e.g., the next-best product to buy), and create new products and services (such as end-to-end digital lending using the additional information for more reliable credit scoring).

Incumbent banks have always had access to vast amounts of customer data such as transaction behavior and payments records. The digital world offers many additional external sources of data that could allow banks to deepen their understanding of existing and prospective customers.

Although fintechs often rely purely on non-traditional information for credit assessment, global banks usually incorporate these additional variables into their existing credit assessment process to enhance their predictive power. Applying analytics effectively along the customer lifecycle will require banks to not only build distinctive analytics capabilities in a central team, but to embed them across the organisation and into employees’ daily work lives.

Experience in implementing analytics engines suggests that the hardest part is not the modelling or insight gathering; instead, embedding analytics in daily operations is often a matter of overcoming legacy working styles and a very human reluctance to change.

A new breed of “ecosystem players” are focusing on the best way to digitally serve the daily needs of customers across a range of services, including meals, grocery shopping, travel, entertainment, and even medical services. Service providers who embed themselves in customers’ daily routine through an ecosystem stand to significantly increase usage of their services while offering customer convenience: a win–win proposition.

They could play three roles in the ecosystem depending on their relative competitive situation: 

Consumer behavior and the competitive landscape for Asia’s retail banking sector have shifted significantly in the three years since the last PFS survey. While consumers are growing more engaged and digital, they also have many more digital options, including offers from non-banking companies and fintechs ready to fulfil their banking needs.

If banks can build capabilities to harness the power of digitisation, they can remain relevant in a fast-changing, fast-paced environment.