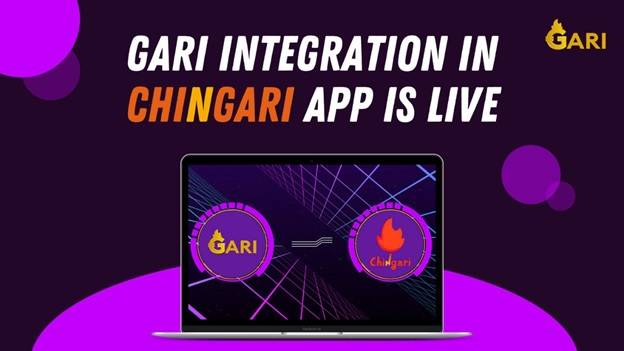 Chingari has cemented its status as social media’s top crypto champion, launching an integrated crypto wallet with the latest version of its mobile app.

The update means Chingari users can now buy, send and receive tokens directly within the app, hopefully creating a flourishing ecosystem that will inspire more content creation on the platform.

Chingari created its cryptocurrency, $GARI, last year, announcing it to the world at a special event hosted by Bollywood’s Salman Khan, who is also the company’s brand ambassador. As the company explained at the time, it sees $GARI playing a critical role in the app. Users will be able to “tip” other users with the tokens if they like their content, while also receiving $GARI tokens as a reward for watching videos. Users who send tips will also see their profile boosted – meaning their own content receives more views and likes, so there’s a big incentive for people to do that.

Chingari also thinks $GARI will encourage e-commerce within the app. Influencers will be able to sell physical merchandise through the app for $GARI tokens, which can then be traded with other cryptocurrencies such as Bitcoin and Ethereum on popular crypto exchanges such as Kucoin, Huobi, Gate.io, OKEx, and MEXC Global, FTX and Binance  where the token launched earlier this month.

By launching its app, Chingari becomes the biggest social media platform in the world to fully embrace crypto. Often called “India’s TikTok”, Chingari is a short video-sharing platform that allows people to upload clips of themselves, complete with filters and soundtracks. It has benefited immensely from TikTok being banned in India, and has grown to count more than 35 million monthly active users. It also recently surpassed Instagram to become the #1 ranked social media app on Android in India.

The launch of Chingari’s in-app $GARI wallet is therefore a big milestone, and one that may do wonders for the wider adoption of crypto in general. “This will be a game-changer in the Chingari App when millions of users will experience the integration of GARI,” said Chingari CEO Sumit Ghosh. “The existing and new users will be able to tip the other creators, boost their profile, gain governance rights, and experience a lot more features on the app.”

Last month, Chingari carried out a soft launch of the mobile app and wallet, with around 500 select users taking part.

Chingari said it’s expecting a positive reaction to $GARI from its community, and has already announced plans to follow up with the launch of an in-app NFT marketplace. With that, users will be able to create exclusive videos and sell them as NFTs.

Bitcoin
"Cryptocurrencies have frequently been the subject of worries by financial regulators and policymakers over the risk they pose to consumers. For almost a decade,...