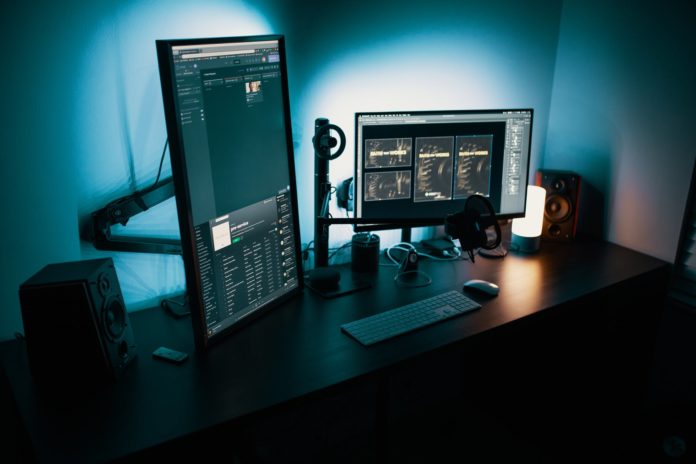 Two decades down under, and the 21st century doesn’t fail to amaze you with its innovation. In fact, the pace of it is so fast, that you inevitably put your hands up and give up keeping track of what is the latest in technology. This phenomenon, in its own ubiquity, manifests itself in Finance, probably more so than anywhere else. One hand to god, let’s admit it, we don’t even refer to Finance as Finance anymore but Fintech (more on that below). While that thought maybe a tad too stretched, Fintech itself is at the cusp of the renovation as if there was a need (Yes Sir)! That flux of change is coming from the headwinds of Blockchain flapping its wings, which happens to be the topic of discussion today:

Unless you possess an understanding, be it shallow, of what Fintech is, broadening your viewpoint on the Blockchain (or its implications) would be playing hardball. We’ll limit our definition of the subject so it meets the ends of this blog post.

The term that is pushed around, and marketed interchangeably with the now fast-fading term Finance, is a 21 century-incarnate of the latter. Finance, as we all understand, is a domain that deals with the details of money management, more or less. The services revolving around money management are Financial services. Conventional Finance rested on paper bookkeeping until digital transformation hadn’t forced businesses against the wall to modernize legacy systems. When unhindered technological change introduced a way to put legacy systems on fast track mode, that was when Fintech was born.

In simpler words, when technology finds a way to optimize a traditionally resource-consuming, finance-related task, that comes under the territory of Fintech. We already have a whirlwind of Fintech development that is reshaping Consumer to Business (C2B) interaction and vice versa. The global Fintech microcosm is projected to grow with a CAGR of 24.8%. That estimate cap-sizes the industry’s valuation at $309.98 Billion by 2022.

Blockchain-enabled growth among its service sectors is expected to play a major role in this transformation. If you’re new to the concept of Blockchain, you’ll find our in-depth guide on the topic helpful. For this post, its a touch and go for a Blockchain overview.

Blockchain is an ever-growing list of records run on a network. Its system architecture is no different from a database. The records are called blocks cryptographically linked to one another forming a chain. The credibility of the chain is maintained in that the mathematical hash of the last block will be found in the subsequent block. The blocks are added to the network, depending upon the consensus mechanisms deployed by the Blockchain developers. Further properties attributable to the Blockchain include: 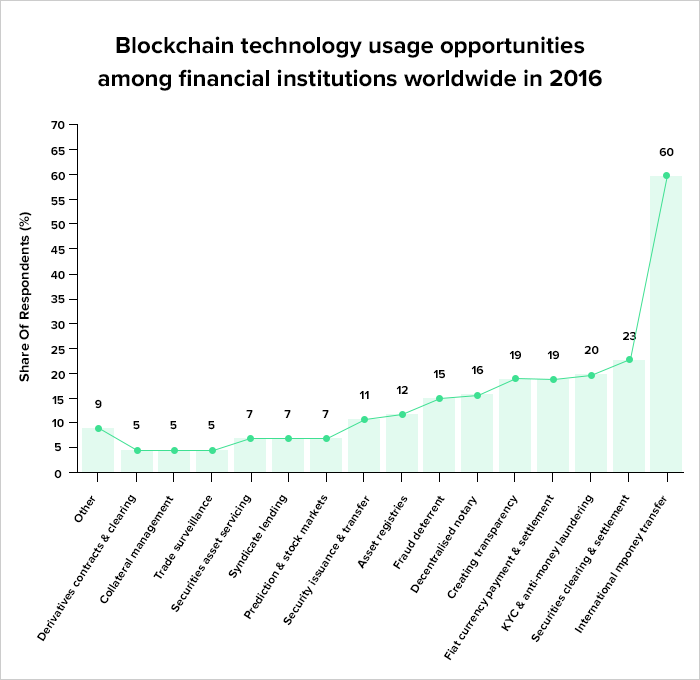 Contemporaneous developments in the Blockchain Technology make it a multi-functional concept, one that the Fintech technology can take justified advantage of. Here’s how its service sectors could harness that power:

Cross-border payments are a chronic pain-point for Banks who’re parallyzed by a lethargic and snail-paced process. In some cases, cross border payments take up to a week to be realized. The middlemen have a crucial foothold on transfer fees charging anywhere in the region of 5-20%. Similarly peer-to-peer fintech applications in the market limit transfers within restricted geography taking their respective slice of transfer fees. 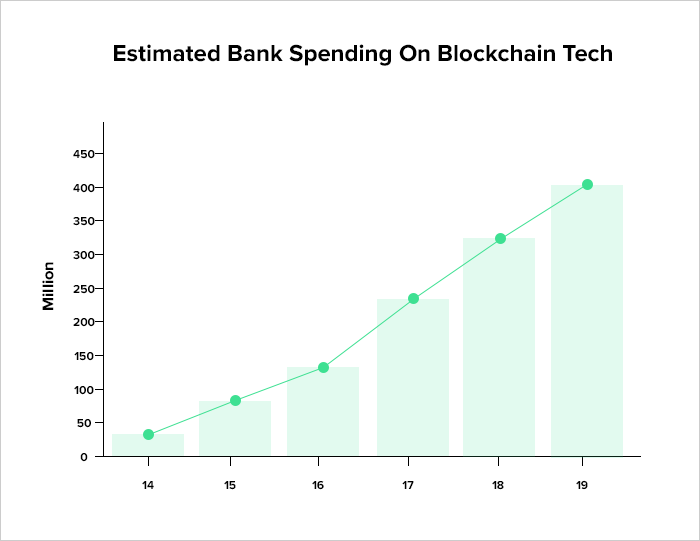 There has to be a better way to stay devoted to regulatory obligations and processing payment transfers faster. Is there?

Financial institutions are analysing the prospect with a Permissioned-style template of the Blockchain technology. They’ll act as the central authority propagating the rules for remittance over the blockchain. As per Deloitte, blockchain based payments from business-to-business and peer-to-peer results in 40% – 80% reduced transaction costs. They’re also settled within seconds. Yes, it would be a paradigm shift but as per a projection by Mckinsey & Co. blockchain could drive $50 – $60 Billion in transcontinental B2B and $3 – $5 Billion in P2P payments respectively.

Westpac and Australian Bank partnered with Ripple, an Enterprise Blockchain company for cross border payments. Wirex is another Fintech company integrating blockchain into its workflow. Its a standalone vendor allowing instant international remittances. Users can avail of the mobile application for purchase orders selecting from 12 (total) fiat and cryptocurrencies. Wirex designed a 2-way Bitcoin debit card with a Visa debit card soon to be released easing point of sale transactions.

There is a lot of conjecture around eliminating third parties from this space but truth be told, Stock markets wouldn’t move a dime without them. An atypical scenario – you sell shares today, but the ownership certificate is not merited until T+2 days, where ‘T’ is the day when you sold the shares. The lag is owing to a few operational bottlenecks such as regulatory approvals, and mandatory clearances. Not to mention the cost of the brokerage eventually levied on the customer in commission fees.

The Fintech Blockchain marriage could wipeout such intermediaries with decentralization where the dystopian exchange runs on nodes dispersed around the globe. They would earn DEX tokens for keeping the network up and running.

The Blockchain technology would assume its pure potential if interoperability is achieved. Once that happens, retail or daily traders with small orders could be stashed in local groups, by partitioning the blockchain into smaller ‘shards’. Order calls will be recorded entirely on the sidechains, running parallelly while only the transfer of certificate will be recorded onto the main blockchain. The result – increased transactional volume and low network redundancy.

DEX, Decentral Cryptocurrency Exchanges like Changhero, Waves Dex and OpenLedger Dex are powering this subset of the Fintech revolution forward. Their algorithms effectuate peer-to-peer trading. Being non-custodial in nature, funds are transferred directly to the users’ wallet, reducing the risk of online heists. The barrier to entry is low for retail customers due to lack of background checks, however, decentralized crypto exchanges often face liquidity issues for pairs with low trading volume.

Like we said in the beginning, conventional Finance is chained to paperwork, perhaps irrevocably. Shipping, for instance, requires client-side formalities like lading bills, invoices, and the letter of credit. The industry has so far leveraged software as a service for internet-enabled settlements, yet the entire process gasps for breath and could be put on Fintech Blockchain Technology steroids.

Smart contracts seem to be the last piece of the puzzle here. They are programmable codes that automate the transfer of tokens (cryptocurrencies) over a blockchain and will ensure the funds move from B2B only when coded preconditions are satisfied. Paperwork could be reduced exponentially, probably to the extent of no use at all, reducing carbon footprints. This requires large scale enterprise migration onto and agreed upon Blockchain protocols the signs of which look promising.

IBM & Maersk collaboration for a global trade platform to find scalable solutions of Blockchain in Fintech. Moreover, Forbes released its report of Top 50 Billion-Dollar companies who’re exploring the scope of implementing blockchain solutions. Over half of them are consulting Ethereum. The Ethereum Virtual Machine (EVM) executes peer-to-peer smart contracts with the networks’ de facto cryptocurrency namesake, Ethereum. Developers can also create decentralized applications over the protocol.

4. Crowdfunding – Regulated Token Purchase For All

Fintech ushered in a new age for raising funds, but Blockchain in Fintech took it a notch up.
Fintech savvy people need no reminding of the Initial Coin Offering bubble. They proved a drooling prospect because investors could buy into a venture purchasing tokens instead of shares, non-taxed.

The tokens were not categorized as securities and hence circumvented regulatory oversight. The tokens, tradeable through crypto-exchanges, had utility underpinned as their USP. As with any security, speculation influenced their prices, which soared after a pump of marketing gimmicks. The same tokens were then dumped, by the investor who’d sell on a high or the founders who’d often go absconding. Apparently, 80% of the projects turned out scam.

The market has evolved since. The new-age Fintech Blockchain avatar has rebranded itself as Security Token Coins. They’re every bit the ICOs were in an operational sense, plus the veneer of regulation by the United States Securities & Exchange Commission. STOs will allow fractional ownership of shares, cross-border investment opportunities, and purchase of securities all approved by the government.

Blockchain Capital ran an STO campaign in accordance with the US SEC and raised $10 million. Those buying into the offering will reap dividends just like any other investor, without staking more than their allowance threshold. Were there no STOs, you’d have to be an accredited investor with an annual salary of $200,000 to participate in the fund.

A syndicate is the coming together of companies for a common cause, which in this case is lending capital to individuals. Consider a bank which can take up to weeks if not months, disbursing loans. While the evaluation approach may be multi-pronged and lengthy, all financial institutions are ordained by the government to authenticate identity backgrounds. This begins with a Know Your Customer verification often summing up with the customers complying to Anti Money Laundering guidelines.

Perhaps, we’ve already been through the agony of performing this mechanically repetitive process at one Bank after the other.

Fintech and blockchain could work hand in hand. There could be a standard Blockchain protocol that the syndicate partners, banks, have assented to join. This protocol would store user credentials such as those required by its partners. Upon the completion of a background check by one Bank, others need not follow suit i.e., if the same customer wants to avail a service. Time consumption will be reduced by a factor of the multitude.

6. Accountancy – Blockchain as an ‘Electronic Notary’

Auditing hinges on time consumption as reconciliation requires both expert manpower input and abides by uncompromisable regulatory protocols. Consider double entry bookkeeping for a moment. For every debit entry made in one register, there ought to be credit in a second register. From record entry to tallying, imagine the hours it would take annual billings to be fact checked and rectified. But how will Blockchain help?

A blockchain is more than just a database. Its architecture and block validation prohibits double spending. Instead of multiple records for every transaction receipt, we can have an integrated trail on a Blockchain, with entries segregated into categories. They’ll have the added protection from cryptography. Auditors could look at a combined array of financial statements whose authenticity can be verified by electronic signatures.

PwC Blockchain Validation Solution. It would be a software that would act as a single node on the Blockchain protocol of the client. Users could customize the same to validate transactions automatically and flag the ones that need further review. Stakeholders with access to the system can build reports from dashboards.

It’s not a question of choosing between Fintech and Blockchain. We know one complements the other. In addition to that, the conversation from yesteryears has switched from whether Blockchains are reliable to integrating them with business legacy systems. Enterprises have a visible interest in the field application of this technology, but the Fintech Blockchain duo has proximity towards startups pioneering innovation in the field. This macro trend unfolding before us testifies to the fact that early adopters will be the greatest beneficiaries in a market that is still in its formative stages.