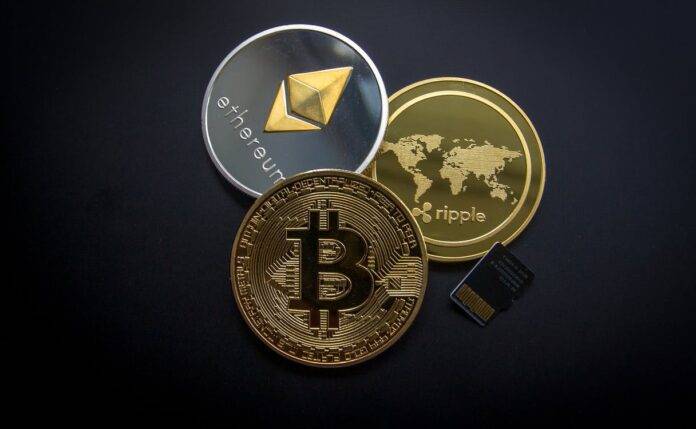 The world has changed dramatically from 2000 to 2020. With the onset of the digital age, innovations in technology and society have propelled us forward so rapidly that many of the “advancements” we considered cutting-edge just a few years ago already seem passé.

These changes impact more than just those who work directly in the technology industry. Investors who become early adopters of successful innovations stand to profit in a massive way. According to a report by UK tech entrepreneur company Tech Nation, global scaleup investments in the technology sector totaled over $300 billion during 2019.

In order to gain the most from tech investing, experts have to monitor upcoming innovations and successfully predict which technologies will succeed and which will burn out. One tool that helps economists and sociologists alike to predict the trajectory of a particular technology is the Gartner Hype Cycle developed by Gartner, Inc., which maps the pattern that new innovations follow as they rise to public attention and ultimately crash or level out to be adopted into the mainstream. 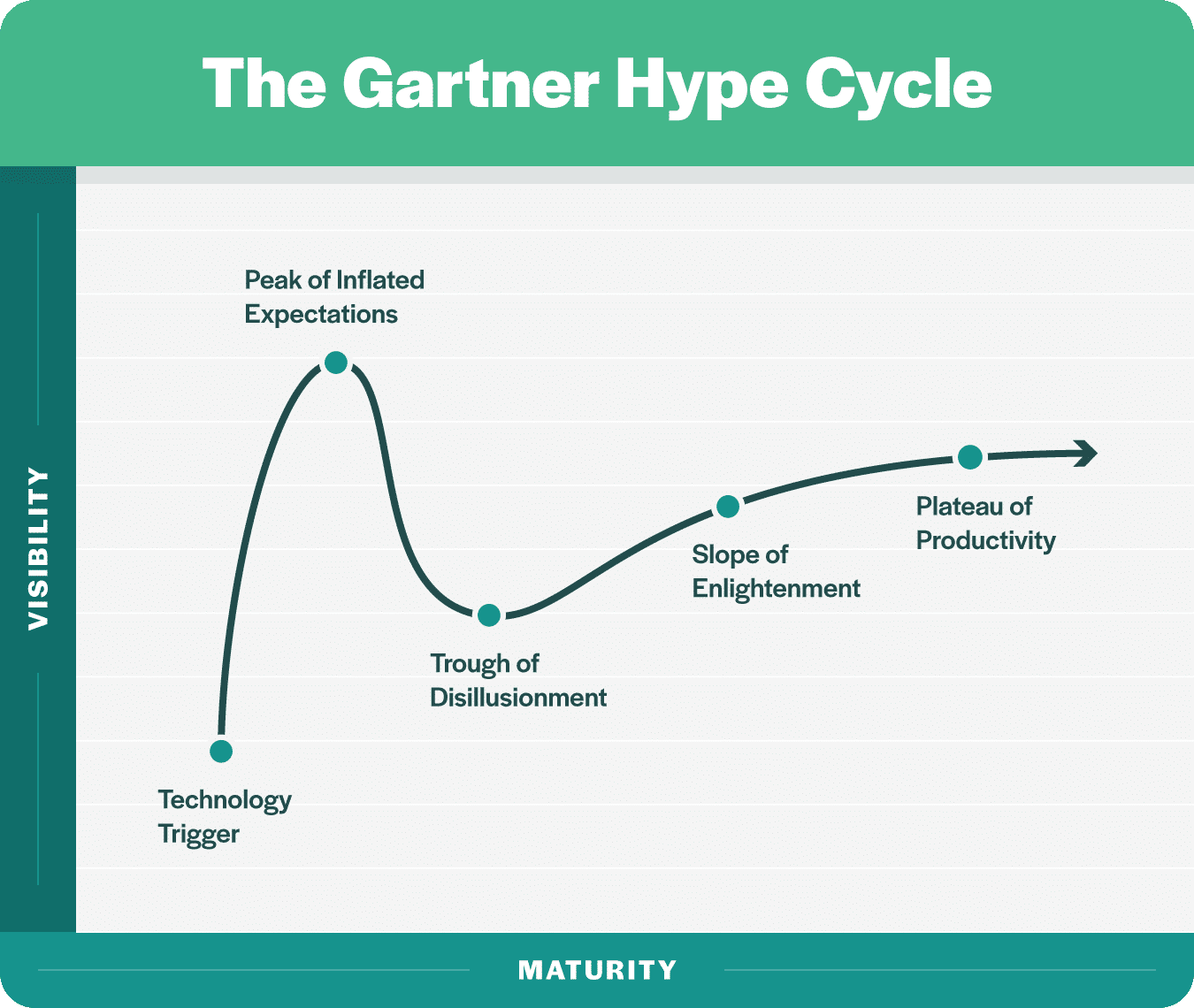 The hype cycle begins with a technology trigger, which initiates a period of increased enthusiasm and excitement that culminates in what’s called the peak of inflated expectations. During this peak, the technology is frequently still in its conceptual or trial stages. Once enthusiasm for the technology hits max capacity, interest begins to wane as the innovation’s novelty wears off. As trial outcomes are published, stakeholders are forced to reconcile their ideals with reality, resulting in a low point in enthusiasm referred to as the trough of disillusionment.

To get a better idea of what the Gartner Hype Cycle looks like in action, we’ve broken down some of the greatest investment hype cycles of the past 20 years, highlighting the catalysts that triggered them and how they played out over time.

Perhaps one of the most famous investment “hype cycles” was the dot-com boom of the late 1990s. The dot-com boom began with the closing of the “digital divide” as technology advancements made computers affordable for the average household. This led to an explosion in “dot-com companies” looking to capitalize on the new widespread access to the worldwide Web.

Enthusiasm peaked along with the market when the tech-heavy Nasdaq reached a record high of $5,048.62 on March 10, 2000, marking the beginning of the end of the dot-com boom. But it quickly became apparent that many dot-com companies, despite being built on what was undeniably successful technology, did not have an equally successful business model to sustain them. One by one, brands like Netscape, GeoCities, and (perhaps most famously) Pets.com folded as it became clear they couldn’t convert investors’ funds into a profit.

Those who managed to invest in the dot-com bubble without falling victim to its ultimate collapse have seen their investment pay off in spades. For example, Amazon was priced at less than $100 per share in 1999 and is worth over $3,000 per share now.

While the initial boom ended quickly, “dot-com” technology has become the norm and is now the baseline on which most new emerging trends are built.

The sustainable energy investment spike of the mid-2000s occurred when sustainable energy entered the social consciousness as a viable alternative to traditional fossil fuels. The first commercial renewables were wind turbines sold in 1927, and the Hoover Dam (perhaps the most visible example of hydropower generation in the country) was built in 1935. However, the renewable energy commercialization didn’t begin in earnest until the mid-2000s, when energy policies released by a number of world powers and the United Nations increased incentives to develop renewable energy resources.

In 2003, the U.S. Department of Energy released a plan called “Grid 2030,” which outlined a gradual transition for the nation to “smart grid” technology. By 2007, renewable energy was a major industry player in the stock market. Growing interest in renewable energy led to multiple IPOs in the renewable sector, and by the end of 2007, the renewable energy industry was worth over $77 billion — up from under $7 billion just seven years earlier.

Looking at historical search trends, we can see a correspondence between interest in smart grid technology and energy companies like First Solar, Inc. (NASDAQ:FSLR), one of the renewable companies whose IPO occurred during the renewable energy boom.

The period of rapid growth that took place in the 2010s slowed following rollbacks on energy regulations by the Trump administration in 2016. But mainstream adoption of renewable energy across industries means the sector continues to thrive.

The dot-com boom began with a spike in households that owned a single, hardwired desktop computer from 15% in 1989 to 36% in 1997. The year 2010 saw yet another digital revolution with the widespread adoption of cloud computing and storage.

By 1999, open-source network “grids” were already in development, and the U.S. government slowly began adopting grid technology for high-priority projects and outposts around the world. At the same time, commercial cloud platforms were in the works. Google began testing “Gmail for Your Domain” as early as 2006, and Dropbox launched in 2007. This is the same year Infrastructure as a Service, Platform as a Service, and Software as a Service were formalized.

The introduction of cloud computing technology to the mainstream allowed for explosive innovation across industries. Netflix (NASDAQ:NFLX) launched its video streaming service in 2007 and saw stock prices rise nearly 25 times by the end of 2014. As cloud technology was adopted universally across industries, it has become the new minimum standard for future innovations.

Like sustainable energy, 3D printing existed for many decades before entering the mainstream as a viable investment opportunity. The first 3D printer was built in 1992, and the first publicly traded 3D printing stock was Stratasys (NASDAQ: SSYS), which had its IPO in 1994. But for many years, 3D printers remained prohibitively expensive without any clear profitable application in other industries. It wasn’t until the 2010s that advancements in material transformation technology allowed 3D printing to break into metal parts manufacturing and the appeal of 3D printing became apparent to consumers and investors.

From 2010 to 2014, Stratasys stock rose from $15 per share to over $135 per share. 3D Systems (NYSE: DDD) experienced a similar spike after moving from the Nasdaq to the NYSE in late 2011. In both cases, stock plummeted again shortly after that, and investment in 3D printing returned to a more normal rate of interest following a cycle of inflated hype.

The technology triggers for the cryptocurrency boom were established in 2008 when Satoshi Nakamoto registered bitcoin.org and published a paper called “Bitcoin: a Peer-to-Peer Electronic Cash System” — a full decade before cryptocurrency spiked.

While search interest in bitcoin peaked in 2018, we can see small bumps in bitcoin queries beginning in 2011. Bitcoin entered the public consciousness and was even featured in a 2012 episode of “The Good Wife.”

Perhaps due in part to this continued anonymity and most people’s lack of a full understanding of what bitcoin was, exactly, the general population’s perception of cryptocurrency remained negative, generally associating it with dark web sites like Silk Road. However, cryptocurrency continued to grow as more countries formally recognized virtual currencies and more businesses adapted to accept bitcoin without forcing the consumer to convert to a standard currency first.

In 2012, Colorado and Washington became the first two states to legalize recreational marijuana, and today, a total of 11 states plus Washington, D.C. have legalized recreational cannabis. In November of 2018, Canadian company Aphria (NYSE:APHA) became the first cannabis-exclusive company to trade on the New York Stock Exchange. Since then, the industry has expanded rapidly, even as federal law continues to prohibit recreational marijuana use. Investors banking on the ultimate legalization of cannabis nationwide may see payoffs in the future.

Studying the investment hype cycles of the past 20 years can help inform your investment predictions going forward. As we can see from past trends, emerging investments frequently follow the same cycle of over-hyped enthusiasm followed by a trough that, for ultimately successful trends, is temporary. For those that aren’t adopted long-term, the trough becomes the end of the cycle. There’s no way for anyone — investors, innovators, economists or otherwise — to know for certain whether an innovation will live up to the hype, but studying past cycles can help increase the likelihood of making a correct guess.

Keeping this hype cycle pattern in mind can help investors evaluate trends emerging in the pandemic and post-pandemic economy. As new technologies are created to help individuals adjust to changes in how we handle everyday life, evaluating the development of these innovations within the context of the hype cycle can increase the likelihood of identifying the next major investment trend.

Similarly, as new technologies continue to develop and investment opportunities emerge concurrently, a better understanding of trend life cycles can help investors avoid being swept up in stock market bubbles and help guide investment decisions that lead to long-term gains. Being able to identify the difference between enthusiasm based on ideals versus those rooted in likelihood of profitability is a skill investors need so they can avoid or pull out of investments that are likely to crash.

What investments do you feel have been overhyped? Why?